Garret and Marcia here. We met in Austin, TX—or as we used to describe it, the “way station for cool, young people who don’t know what they want to do with their lives yet.” We found each other through a Craigslist ad for an apartment rental in South Austin. We weren’t the academic sorts and wanted to stay away from the heart of the UT campus, but still close to the city center. And this was largely before the overhaul and gentrification of East Austin. Moreover, we both had new pets and the listing had explicitly stated that the apartment was pet-friendly. So, due to a communication failure on the part of our new landlord (and roommate), we both showed up at the apartment on the same day and at the same time. We both loved the apartment. Fran, the landlord, joked about auctioning off the rental to the highest bidder. We pointed out that we were only in this predicament because of his communication snafu. We talked and talked and never really fought and, long story short, by the end of the day, we concocted a plan to curtain-off the large reading nook, and I ended taking the nook (at a steep discount) and we all made it work for six months—at which time the last of the 4 house residents moved out and I took her bedroom. 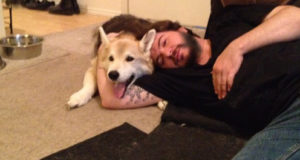 ….while I had my Ramsicle (Ramsi), a feisty short-hair that nevertheless took to Charlie Boy…. 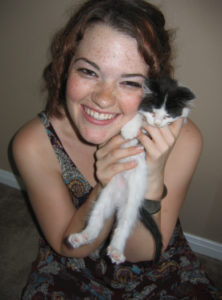 And we somehow made it work—not the curtain nook but a cat and a dog together with 4 people in the same living quarters. It’s still something that I’m oddly proud of all these years later. Nowadays, Garrett and I are both in different cities, neither of them Austin, we have families and separate lives. But we still keep in touch, and we thought a great way to maintain a connection, was to start a website together dedicated to helping people name their pets. Welcome! May this pet-naming resource help introduce you to a life together with your new pet that’s just as rewarding as our time together in Austin.