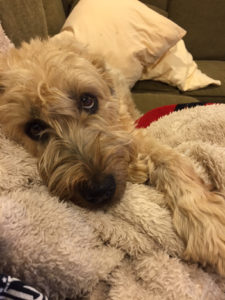 My poodle’s name is Jack Noodle. His hair kind of looks like noodles, at least some of the time. Plus, he has his spurts, but he isn’t always the highest-energy dog. So, my friend would sometimes say that he has the personality of a wet noodle. But it was brother who protested and said, “You can’t name that dog noodle. He needs a good strong name, especially with a face like that. Let’s call him Jack.” So it was that he became our Jack Noodle. 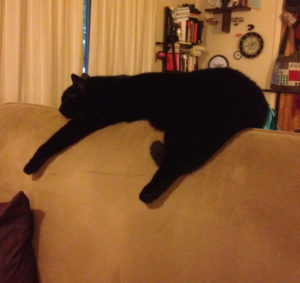 When my kitten was a little kitten (because all my cats are perma-kittens to me), she was a crazy one. She would dance-jump over and over and, then, when she was a little older she would chase after the laser pointer and try to catch it real fast with her paws all spread out–spider-paws!! I also had this thing where I didn’t want the name to be just about her black fur. Like Midnight or Shadow or whatever. I mean, that’s great if that’s your thing and it keeps it simple, but I’m glad we went with Crazy Jitterbug….CJ. It was also named after my husband’s kitten growing up, CC, which was short for Crazy Cat because, well, I don’t exactly know. 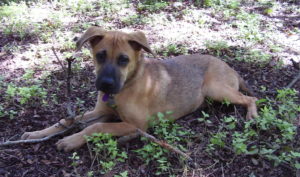 We named our dog Gathel because even when we first got her, she had dark eyes, and my little girl thought she looked like her great Aunt Gathel. “She looks like Aunt Gathel,” she said, which we thought was cute until she said, “with dark eyes.” And then we started laughing. It helped that Gathel wasn’t in the room at the time, and we never really told her the full story. She felt honored, she told us.

Contribute to the Gallery of Names

Add to our Gallery with your own Pet Name Story! A rose by any other name may be just as sweet, but what we name our pets has consequences for how we see them for the rest of their, and our, lives. If you have a good story about how you named your pet and why, share it with us along with a personal photo of your beloved pet. You can send your story and photos to meyer_garrett@mail.com. Or you can also send us a quick message with questions and commments.